It is time for an update to my not-so-regular report on global cross-cooking phenomena. After haggis pakora in Glasgow and dangerous experiments in my own kitchen, the time has come for the Basque country. Just in the middle of the Bay of Biscay, between Europe's finest surfing beaches (south of France and north of Spain), lies Donostia or San Sebastian. Not only is it a beautiful city, to which I am soon moving, but it is also the place with the highest concentration of Michelin stars per capita!

One of the best things with this part of the world are the ubiquitous pintxos (the Basque answer to tapas). In one of the fanciest places serving pintxos, called A Fuego Negro, they have embraced experimental cross-cooking in an awesome way. The basic recipe is easy:

The result is called Mc Kobe, was brilliant, and can be seen below.

This was the first time I had eaten kobe beef. For those of you who don't know, it is a very special Japanese delicacy, made from cows who get to drink beer during the last weeks of their life, and get hour long daily massages. This makes them very happy and relaxed cows. And tasty. I highly recommended it (both the massage and beer parts, but mainly the Mc Kobe). 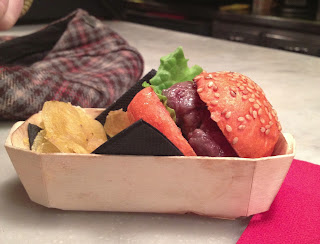 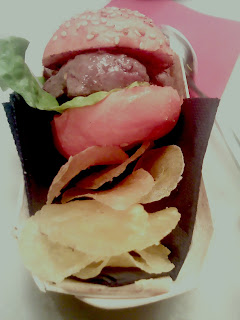